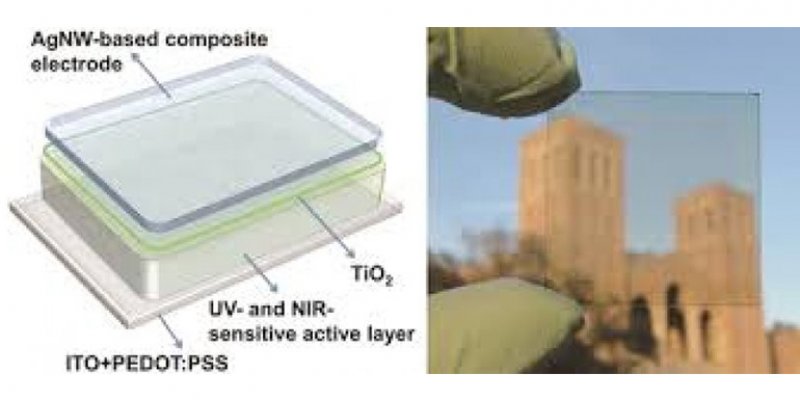 A Michigan State University research team has finally created a truly transparent solar panel — a breakthrough that could soon usher in a world where windows, panes of glass, and even entire buildings could be used to generate solar energy. Until now, solar cells of this kind have been only partially transparent and usually a bit tinted, but these new ones are so clear that they’re practically indistinguishable from a normal pane of glass.

Previous claims toward transparent solar panels have been misleading, since the very nature of transparent materials means that light must pass through them. Transparent photovoltaic cells are virtually impossible, in fact, because solar panels generate energy by converting absorbed photons into electrons. For a material to be fully transparent, light would have to travel uninhibited to the eye which means those photons would have to pass through the material completely (without being absorbed to generate solar power).

So, to achieve a truly transparent solar cell, the Michigan State team created this thing called a transparent luminescent solar concentrator (TLSC), which employs organic salts to absorb wavelengths of light that are already invisible to the human eye. Steering clear of the fundamental challenges of creating a transparent photovoltaic cell allowed the researchers to harness the power of infrared and ultraviolet light.

The TLSC projects a luminescent glow that contains a converted wavelength of infrared light which is also invisible to the human eye. More traditional (non-transparent) photovoltaic solar cells frame the panel of the main material, and it is these solar cells that transform the concentrated infrared light into electricity.

Versions of previous semi-transparent solar cells that cast light in colored shadows can usually achieve efficiency of around seven percent, but Michigan State’s TLSC is expected to reach a top efficiency of five percent with further testing (currently, the prototype’s efficiency reaches a mere one percent). While numbers like seven and five percent efficiency seem low, houses featuring fully solar windows or buildings created from the organic material could compound that electricity and bring it to a more useful level.

Researchers on the Michigan State team believe their TLSC technology could span from industrial applications to more manageable uses like consumer devices and handheld gadgets. Their main priorities in continuing to develop the technology appear to be power efficiency and maintaining a scalable level of affordability, so that solar power can continue to grow as a major player in the field of renewable energy. By Chloe Olewitz